Party Politics US and hosts have selected a Georgetown location to show the documentary film, directed by Mignotae Kebede, What Happened 2 Chocolate City. The film will be shown to a limited audience at 6pm on Wednesday, February 26, 2020, at the private L2 Lounge in Cady’s Alley, Georgetown. Joe Clair, morning host for WPGC’s morning drive show will moderate the conversation following the film.

“Georgetown has a rich history where Blacks were displaced by gentrification and the history is often forgotten. We see that happening today with yet another wave of gentrification displacing another generation of Black Washingtonians due to low wages, high rise buildings and exorbitant rents. It’s another form of discrimination.” Atiba Madyun, President of Party Politics US said.

The feature length documentary explores the rise and decline of one of America’s most prominent Black communities. Told through the lens of 3 generations of Black Washingtonians, John, Mike and Zarina, the film tracks four waves of Black displacement in the nation’s capital.

“When I moved here from California 10 years ago, I thought DC was a rich black city often referred to as Chocolate City. I quickly realized this wasn’t true. After college, my work in SE DC with young African American boys and girls made me reflect on my life in DC as a Black “gentrifier.” I came to realize that people are not only being displaced, Black culture and its rich history of the city is too. My film is a message for natives, transplants and government.” Mignotae Kebede, director of What Happened 2 Chocolate City.

“The L’Enfant Trust is happy to partner with Party Politics US and director, Mignotae Kebede to show a valuable part of DC history and encourage everyone to be a part of protecting, preserving the history of Black Washington.” Lauren McHale, President and CEO of the L’Enfant Trust.

To see the trailer for What Happened 2 Chocolate City visit https://youtu.be/z89PeSWWxZI

About the Film What Happened 2 Chocolate City is a feature length documentary, exploring the rise and decline of one of our nation’s most prominent Black communities through the narrative of three individuals. John, Mike, and Zarina, each represent a generational experience many Black Washingtonians faced over the past century.

Director, Mignotae Kebede is a native Californian and graduate of The George Washington University (GWU) dedicated to exploring the intersections between creative expression and social change. Working with African American boys and young men east of the Anacostia River, she developed the concept for the forthcoming film.

The L’Enfant Trust’s mission is to preserve and revitalize Washington D.C.’s neighborhoods through programs that connect residents to their collective history, protect the city’s architectural heritage and reactivate neglected properties within their communities.

Progress is evident at the three properties that are under active construction! We anticipate being able to list 1518 W Street, SE (2 bedrooms, 1.5 baths) for sale this spring, followed by 1326 Valley Place, SE (4 bedrooms, 2.5 baths) and 1648 U Street, SE (4 bedrooms, 2.5 baths) in late spring/early summer. There will be maximum income restrictions (not to exceed 120% Median Family Income) as well as minimum household size eligibility requirements to ensure that the properties are serving as homes for moderate-income families in the community.

The exterior has been painted and interior drywall has been installed. We have restored power which will allow the floors to be laid next.

Interior framing is in place and windows have been installed.

The rear has been rebuilt (reusing the historic brick to face the new foundation) and new framing is in place. The juxtaposition with the historic material in these photos is striking!

Thomas Archer Contracting has begun the work at 1326 Valley Place, SE and 1518 W Street, SE, and is poised to commence at 1648 U Street, SE once a series of zoning issues have been resolved. We anticipate completing the projects early in 2020, barring major road bumps.

The re-zoning and pre-construction planning for 1220 Maple View Place, SE is beginning this summer. We hope to submit plans for permits this fall.

The L’Enfant Trust just received a $65,000 grant from The 1772 Foundation to rebuild the foundation at 1518 W Street, SE! We could not be more grateful for this grant or for their continued support and partnership.

On initial survey, 1518 W Street, SE seemed to be the best of the four city-owned properties that were transferred to The L’Enfant Trust’s HPRP last year, but as it turns out, the foundation is shallow and is constructed of only a single wythe of brick with a few brick piers on three sides of the house. The existing foundation is inadequate by today’s building code and, in addition, one portion of the foundation has buckled and is no longer supporting the house. Due to these conditions, extensive rebuilding and reinforcement of the brick foundation will be required to make the house safe to inhabit. Because of the high cost of rehabilitation projects like these, and the Trust’s commitment to selling them as income-capped housing for moderate income buyers, the budgets for all four properties are very tight, and this discovery threatened all of them. The plan for the foundation is to pour new reinforced concrete walls behind the original brick walls, tie the walls together, and install structural beams and columns to support the floors above.

These projects would not be possible without the ongoing generosity of The 1772 Foundation. Read their press release here.

STATUS: Full-time; Monday-Friday from 9am to 5pm.

Under the direction of the President/CEO:

Salary is commensurate with experience and education and will include benefits. Small, friendly office located near public transportation (Red Line Metro) in downtown Dupont Circle.

By thelenfanttrust | May 30, 2018 | Comments Off on 5/30/18: Sales Guidelines for Four Historic Anacostia Properties

To comply with our Disposition Agreement with DC Department of Housing and Community Development, The L’Enfant Trust will use the following guidelines for the sale of the properties:

4/6/18: A Peek Inside Each of the Four Historic Anacostia Houses

Last week we had our first site visit with Cunningham Quill Architects to evaluate existing conditions at each of the properties.  This is what we found… 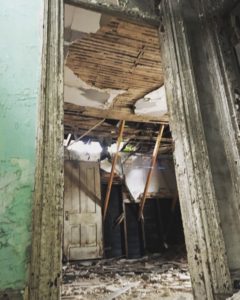 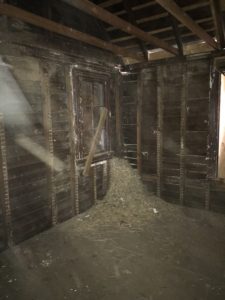 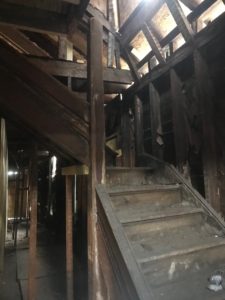 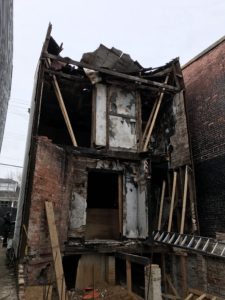 WASHINGTON, D.C. – The L’Enfant Trust (the Trust) announced today it acquired four properties in Historic Anacostia from the Washington, D.C. Department of Housing and Community Development on March 9, 2018. This is in accordance with legislation that the Council of the District of Columbia passed in December 2017 authorizing the transfer of the properties to the Trust for rehabilitation.

The properties, which are extremely distressed and have been vacant for decades, include:

Because the properties are located within the Anacostia Historic District, they cannot be razed and must be restored to historic preservation standards.  As a non-profit with the mission of preserving and revitalizing DC’s historic neighborhoods, the L’Enfant Trust will act as a developer for historic properties via its Historic Properties Redevelopment Program. The Trust will take on the rehabilitation costs that are not economically feasible for individuals or for-profit developers, using philanthropic loans, grants and donations to close the funding gap.

“The L’Enfant Trust is thrilled to start this important work, and we look forward to providing much needed workforce family housing and contributing to the revitalization of Historic Anacostia,” says Lauren McHale, President of The L’Enfant Trust.

Once rehabilitation is finished the properties will be sold as workforce housing to qualified buyers earning at or below 120% of the median family income, targeting teachers, nurses, firefighters and employees of the District government. 1220 Maple View Place, SE, the largest of the four properties, will be rezoned and reverted to its original design as a two-family dwelling. Construction on the three smaller houses is anticipated to begin late summer or early fall 2018 after stabilization, architectural planning and permitting have been completed.

The L’Enfant Trust is celebrating 40 years of preserving the architectural heritage of Washington, DC with programs including its nationally recognized Conservation Easement Program and its Historic Properties Redevelopment Program.

By thelenfanttrust | Feb 7, 2018 | Comments Off on 2/7/18: Historic Anacostia Houses Update
The L’Enfant Trust is working with DC Department of Housing and Community Development on the disposition agreement for four houses in Historic Anacostia that the DC Council voted to transfer to the Trust for rehabilitation. Progress will be updated here until the projects are completed. See past articles here for further information. 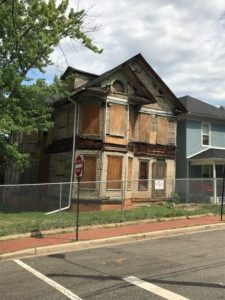 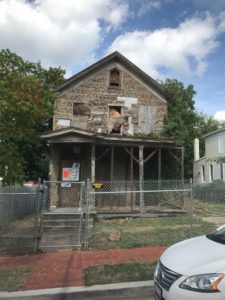 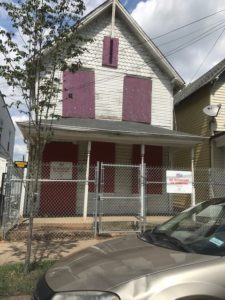 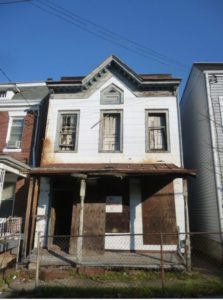 By thelenfanttrust | Jun 23, 2017 | Comments Off on Lauren Oswalt McHale Named President and CEO of The L’Enfant Trust

WASHINGTON, DC – The Board of Trustees of The L’Enfant Trust is very pleased to announce the promotion of Lauren Oswalt McHale to President and CEO, effective July 1. In her new role, she will lead organizational development, fundraising initiatives, and work to identify additional opportunities to enrich the region through historic preservation and community revitalization.

McHale succeeds Carol B. Goldman, who is stepping down after serving as President and CEO of the Trust since 1998. During her tenure, Goldman directed the Trust’s dramatic expansion of the Conservation Easement Program into a nationally recognized model and oversaw the launch of DC’s first Historic Properties Redevelopment (HPR) Program.

McHale has worked for the Trust for over a decade, previously serving as the Executive Director managing daily operations and programs, and as the Director of Preservation, overseeing the Trust’s easement portfolio. In 2012, she initiated the HPR Program which rehabilitates distressed historic properties where such rehabilitation will have the greatest impact on community revitalization and sustainability.

“I look forward to this opportunity to lead and expand on the Trust’s programming and to further our work with Washington communities that want to experience the economic, environmental, and social benefits that historic preservation can provide,” said McHale.

McHale has a B.A. in Art History and Historic Preservation and Community Planning from the College of Charleston and a M.S. in Historic Preservation from the School of the Art Institute of Chicago. She also serves as President of the Latrobe Chapter of the Society of Architectural Historians, and as a board member for both Preservation Action and the ACE DC Mentor Program.

As it approaches its 40th anniversary, The L’Enfant Trust now protects 1,136 historic buildings in the Washington, D.C., region through conservation easements—a form of voluntary preservation whereby property owners relinquish certain rights to alter the exterior of their historic properties, which may qualify them for a tax benefit recognizing their “gift to the street.” The Trust’s HPR Program has successfully rehabilitated two, long-vacant, and derelict houses in the Historic Anacostia community.

Thanks for subscribing! You will be receiving our newsletter updates soon!

Something went wrong. Please check your entries and try again.